About Us » Our Patron Saint 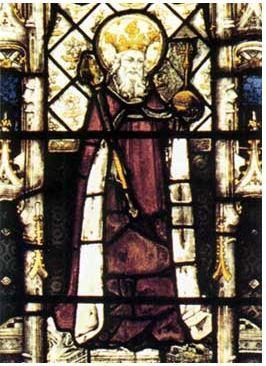 Saint Egbert was born to Northumbrian nobility in 639 AD and in his youth undertook a pilgrimage to Rathemigisi monastery in County Louth, Ireland. During his stay, the plague took hold and killed one of his companions. Sick and fearing for his own life, Saint Egbert prayed that God would spare him and vowed to live a holy life, remaining in perpetual exile from Britain. After his recovery and subsequent ordination, Saint Egbert became a passionate missionary and probably a travelling Bishop, organizing the missions of Saints Willibord and Wigbod to the Frisians (Germanic tribes) in Europe. He hoped to travel with them, but was instructed in a vision received by the Venerable Bede to focus his energies on reform of the monastic life. Initially resisting this message, he eventually traveled to Iona in 716 AD, and after thirteen years of gentle persuasion, convinced the monks to adopt the Roman method of calculating the date of Easter. Saint Egbert died aged 90, several hours after celebrating the first reformed Easter Mass in 729 AD. )